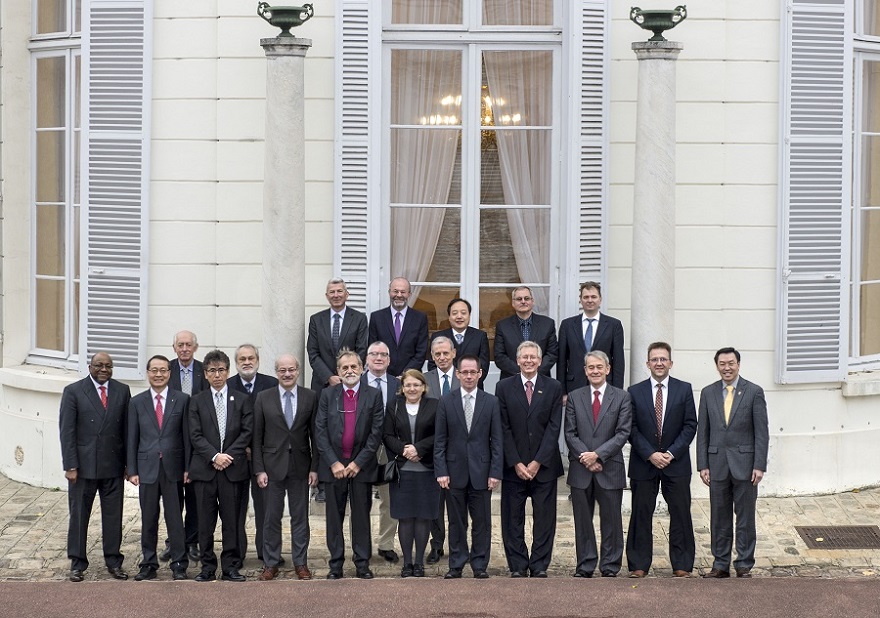 The CIPM received the report of the ad hoc Working Group on Terminology, considered the matter to be closed, decided to leave the current practice to stand and encouraged the Director to work with Dr Quinn to update the BIPM website accordingly.

The CIPM decided not to change the criteria for membership of the Consultative Committee for Units (CCU) and requested the CCU President to invite KRISS (Republic of Korea), METAS (Switzerland) and NRC (Canada) as guests. The CIPM noted that the Presidents of all of the Consultative Committees are welcome to attend meetings of the CCU. A full discussion on the criteria for CCU membership will be held in June 2016 during the meeting of the CC Presidents.

The CIPM will review the policy for approving and reviewing membership and observership of the Consultative Committees at a meeting of CC Presidents to be held in June 2016. The decisions on observer and member status presented at Session II of the 104th meeting of the CIPM are postponed until after this review.

The CIPM welcomed the document "Mise en pratique for the definition of the candela and associated derived units for photometric and radiometric quantities in the International System of Units (SI)" presented by the President of the Consultative Committee on Photometry and Radiometry (CCPR).

The CIPM received a report from the President of the Consultative Committee for Electricity and Magnetism (CCEM) on the timing of the implementation of the new definitions of the SI base units following approval by the CGPM at its 26th meeting (2018). The CIPM's preferred option is that all new definitions should come into force at the time the CGPM makes a resolution. The CIPM agreed to take a final decision at its next session in 2016.

The CIPM commended the Consultative Committee for Ionizing Radiation (CCRI) in its proposal to operate its three Sections in the manner of the Working Groups of the other Consultative Committees, whilst retaining the title "Section". Consequently, the CCRI is able to decide on the membership and observership of its Sections.

The CIPM took note of Resolution 34/1 of the Joint Committee of the Regional Metrology Organizations and the BIPM (JCRB) on the policy for reporting comparisons that involve non-signatories to the CIPM MRA and mandated the Presidents of the Consultative Committees to implement it.

The CIPM granted provisional acceptance of GULFMET as a Regional Metrology Organization (RMO) in accordance with the procedures of the JCRB and within the meaning of the CIPM MRA.

The CIPM reviewed reports and papers submitted by the CIPM Sub-Committee on the BIPM Pension and Provident Fund and Health Insurance and by the CCE of the BIPM relating to the proposals to reform the BIPM Pension Fund to address its long-term financial sustainability. The CIPM confirmed its intention that the Pension Fund be placed on a financially sustainable basis in order that it should be sufficient to support pension benefits in the long term. The CIPM requested the Pension Fund Advisory Board to progress the work started by the Sub Committee.

The CIPM considered a request from an association of 'anciens' of the BIPM to have a representative or observer on the PFAB. The CIPM noted that it maintains a high standard for transparency with respect to the operation and financial status of the Pension Fund. It also noted that the PFAB now includes an elected representative of the BIPM active staff and that active staff have a natural interest in the rights and benefits that they will receive as pensioners. The CIPM therefore does not consider it necessary to include a representative or observer of the association on the PFAB at this time.

The CIPM decided to close the CIPM Sub-committee for the BIPM Pension and Provident Fund and Health Insurance (PF&HI) and thanked its Chairs and members for their work.

The CIPM decided to establish a Pension Fund Advisory Board (PFAB) as described in the amended Rules and Regulations of the Pension and Provident Fund (dated 29 September 2015). The PFAB will take over the responsibilities of the CIPM Sub-Committee on the BIPM Pension and Provident Fund and Health Insurance (PF&HI) relating to pensions. It approved the amended Regulations in the English and French versions (both dated 29 September 2015).

The CIPM decided to transfer responsibility for the BIPM Health Insurance scheme from the CIPM Sub-Committee on the BIPM Pension and Provident Fund and Health Insurance (PF&HI) to the CIPM ad hoc Working Group on Conditions of Employment.

The CIPM approved the proposed amendments to the BIPM Financial Regulations (CIPM/2015-II-15).

The CIPM approved the budget proposed by the Director for 2016 (CIPM/2015-II-15), noting that he will provide further details of budgeted staff costs to the CIPM Sub-Committee on Finance.

The CIPM approved the proposal that the BIPM point be adjusted temporarily during the period 2016-2019 by a maximum of 1 % on an annual basis.

The CIPM confirmed its approval of the audited financial statements of the BIPM and of the BIPM Pension and Provident Fund which it had approved by correspondence in June 2015. The CIPM gave the BIPM Director quietus for the 2014 exercise.

The CIPM accepted the minutes of Session I of the 104th meeting of the CIPM as a true record.