105th meeting of the CIPM 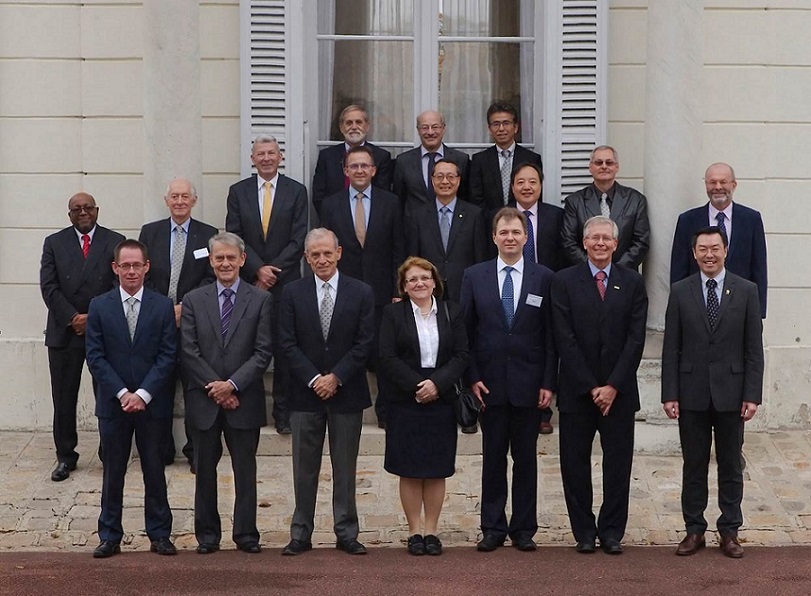 The CIPM agreed that the 26th meeting of the CGPM will be held at the Palais des Congrès de Versailles on 13-16 November 2018 with informal meetings planned on 12 November.

The CIPM requested Dr May to re-form the CIPM ad hoc Working Group on Membership and to develop a proposal for appointing Vice-Presidents to the Consultative Committees.

The CIPM appointed Dr Bulygin as Chair of the CIPM Sub-Committee on Awards and asked him to prepare Terms of Reference and a scope for a suitable awards programme for presentation to the next meeting of the CIPM.

The CIPM appointed Dr Castelazo as President of the CCL.

Following the resignation of Dr Bowsher, Dr Brandi and Prof. Inguscio from the CIPM, the CIPM voted to elect a "slate" of three candidates for provisional election. The CIPM asked the CIPM Secretary to submit the names to the Committee for Election of the CIPM (CEC) for their approval.

The CIPM welcomed and approved the revision submitted by the Director of the BIPM of the Vision, Mission and Objectives of the BIPM.

The CIPM decided, on the basis of the criteria it has previously adopted, that it would be appropriate for the Plurinational State of Bolivia, for Bosnia and Herzegovina, and for Montenegro to become States Parties to the Metre Convention. The BIPM will convey the Decision, recalling Resolution 4 "On the status of Associate State of the General Conference" adopted by the CGPM at its 24th meeting, and the implications regarding the increase in subscriptions should any of the States choose to remain as an Associate of the CGPM.

The CIPM accepted the following changes to the membership and observership of the Consultative Committees:

The CIPM agreed on the proposal from the CCRI President to align the criteria for CCRI membership in order to align them with the rules that apply to all Consultative Committees.

In preparation for the next meeting in 2017 and to ensure a wide representation of the different CCRI Sections, the CIPM accepted the proposal from the President of CCRI to invite the countries with membership of all three Sections of CCRI as Members of CCRI, and to inform all other institutes with membership of one or more of the Sections, that they can apply for membership of the CCRI. The CIPM provisionally approved the list of proposed Members, subject to the acceptance by the prospective Members.

The CIPM decided that all Consultative Committees will review whether their Members and Observers fully meet the criteria given in CIPM-D-01.

The CIPM decided that the CCU will adopt the same criteria for participation as the other CCs for all meetings in 2018 and beyond. Document CIPM-D-01 will be updated accordingly.

The CIPM decided that for all Consultative Committee meetings in 2017 and thereafter:

Document CIPM-D-01 will be updated accordingly.

The CIPM decided to revise the Rules for Membership of the Consultative Committees as follows; all Member States will have the right for one national laboratory charged with establishing national standards in the field to be an Observer at the applicable Consultative Committee and to send one person (only) and following their request for each meeting. Document CIPM-D-01 will be updated accordingly.

The CIPM requested the Consultative Committees to work together to write a joint statement for all their stakeholders addressing the changes to be expected under the revised SI. The CCU Executive Secretary is designated as the coordinator for this action. The statement will be considered for inclusion in the final draft of the 9th edition of the SI Brochure. The statement should be sent to the CCU President by the end of July 2017.

The CIPM approved Draft Resolution 1 proposed by the CCU for the CGPM.

The CIPM requested from all Consultative Committees an update of the mises en pratique (current online Appendix 2) to be ready on 31 July 2017. This Appendix will continue to be an online Appendix in the context of the new Brochure.

The CIPM endorsed the latest draft of the 9th SI Brochure as the close-to-final one. The BIPM (the BIPM Director, Dr Davis, Mr Sitton and the CCU Executive Secretary) supported by Dr Quinn will produce a fully edited version by 30 June 2017.

The edited version will be approved by the President of the CCU supported by Dr Quinn. The fully edited Brochure shall be brought to the CCU in September 2017 and to the CIPM in October 2017 for final approval.

The CIPM considered that the consultation among the stakeholders has been completed. Nevertheless, if matters of substance are raised, the CCU President shall bring them to the CIPM.

The CIPM decided that the definitions in the draft of the 9th SI Brochure and in Draft Resolution 1 shall not contain the term "implicitly".

The CIPM requested the CCPR to prepare a few concise sentences to be added into the main text of the SI Brochure that clearly address the photochemical and photobiological quantities on a general level and refer to an online Appendix (corresponding to Appendix 3 in the 8th edition of the SI Brochure) for details. The sentences should be forwarded to the CCU Executive Secretary before 1 January 2017.

The CIPM agreed to treat the radian and the cycle in the 9th Edition of the SI Brochure in compliance with the CGPM Resolutions in force (for example, Resolution 12 of the 11th CGPM (1960) and Resolution 8 of the 20th CGPM (1995)).

The CIPM agreed to treat the unit one, symbol 1, in the 9th Edition of the SI Brochure as in the 8th Edition as the neutral element of any system of units but avoid calling it a derived or a base unit.

The CIPM agreed with the proposal made by the CCU regarding the number of digits to be kept in the numerical values of the defining constants (case 3 under the conditions mentioned in the CCU report).

The CIPM took note of the intention of IUPAC to propose a revised wording for the new definition of the mole.

The CIPM recommended that the date on which the redefinition of the SI shall come into force be 20 May 2019 (World Metrology Day).

The CIPM recommended engagement of the pensioners with the PFAB and invited the Director of the BIPM, the President of the PFAB and the BIPM Legal Advisor to develop a proposal.

The CIPM requested the President of the CIPM to write to Dr Christian Bock, former Director of METAS, thanking him for his extremely valuable work as an external expert on the PFAB. The CIPM decided to ask Mr Thomas Grenon, Director of the LNE, to act as an external expert to the PFAB, and requested the CIPM President to write with a formal invitation.

In anticipation of the agreement of the proposed reforms to the BIPM Pension Fund with staff and following the Mercer study of 29 September 2016 reviewed by the PFAB, the CIPM invited the PFAB to initiate an actuarial review of the Fund in 2019. This study will inter alia allow the PFAB to consider the introduction of a choice for active staff to join the "Post 2017" section if they choose and also to confirm the maximum rates of contribution from staff needed to address the long-term financial stability of the Fund.

The CIPM decided to amend the Rules of the BIPM Pension Fund to implement changes consistent with the proposals of the Mercer report of 29 September 2016 and requested the Director of the BIPM to send the proposals to the CCE for their advisory opinion.

The CIPM reviewed the advisory opinion received from the CCE (dated 7 June 2016), the available data on the financial position of the Pension Fund and the assumptions and expert advice received from the actuary (Mercer).

The CIPM noted that the Mercer study projected that reaching long-term financial sustainability will require contributions from existing staff to reach 19.8 % for the Pre-2010 Section and 18.8 % for the Post-2010 Section. The CIPM considered the request from the staff representatives and agreed to reach these rates following a series of stepped increases.

The modelling assumed that all staff joining the BIPM from 1 January 2017 will have reduced benefits and contribute at a level of 15 % of salary.

The CIPM approved the budget proposed by the Director for 2017 (document CIPM/16-23).

The CIPM confirmed its approval of the audited financial statements of the BIPM and of the BIPM Pension and Provident Fund which it had approved by correspondence in July 2016. The CIPM granted the BIPM Director quietus for the 2015 exercise.

The CIPM congratulated the Director of the BIPM who has been nominated to receive the 2016 Finkelstein medal of the Institute of Measurement and Control. This award is made on an annual basis to a person who has made outstanding contributions to measurement science at a global level.

The CIPM accepted the minutes of Session II of the 104th meeting of the CIPM as a true record.