103rd meeting of the CIPM (Session I) 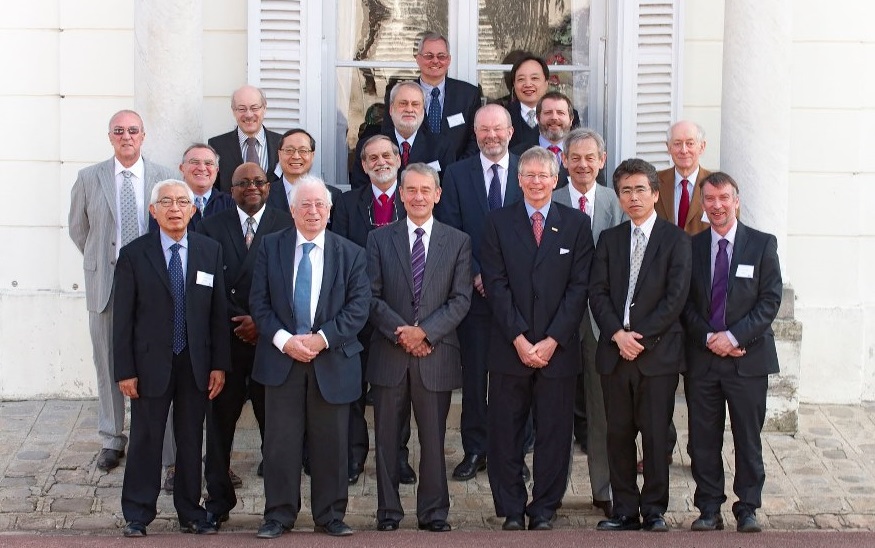 The CIPM would welcome the presentation of a formal proposal on the creation of an advisory group on G experiments at its next meeting.

The CIPM charged S. Arlen and T.J. Quinn to prepare notes on terminology to be forwarded to the CIPM and to be considered by the bureau at its meeting in June 2014. The CIPM bureau will prepare a recommendation to be submitted to the CIPM in November 2014.

The CIPM agreed to adopt the proposed new BIPM logo (noting that the CIPM MRA, KCDB and JCTLM logos will not change and that the "macaron" will continue to be used).

The CIPM supported the continued role of the BIPM as JCTLM Secretariat and approved the draft responses to the JCTLM questionnaire. The CIPM encouraged the BIPM to seek one-off funding to support streamlining the process and evolution of the JCTLM database.

The CIPM approved the document BIPM Policy on soliciting and accepting support from Third Parties.

In the framework of the updating of the 8th edition of the SI Brochure, the CIPM approved the modification of the order of base units in the expressions of derived units. It did not approve the need to specify units for very small angles for applications in astronomy in the SI Brochure. The CIPM accepted the proposed publication process for the updates and the recommendation to proceed with amending the document on the website and producing a short printed summary of the updates.

The CIPM invited Consultative Committees to comment on chapters 1 to 3 of the Draft Version of the 9th edition of the SI Brochure by March 2015.

The CIPM supported the initiative of the CCU President for a new logo for the SI.

In recognition of I. Mills' unique and outstanding contributions to metrology and Metre Convention activities while President of the CCU, and the very broad impact of his contributions, the CIPM appointed him as an honorary member of the CCU.

The CIPM welcomed the presentation by J. Valdés on “The role and performance of the CIPM as a scientific body and a direction giving and supervisory body of the BIPM” and acknowledged its responsibilities to instigate and review fundamental metrological activities. In this context the work he mentioned addressing atom interferometry that was suggested in a recent paper to be among the potential ways to redefine the kilogram was noted by the CIPM. The CIPM encouraged further discussions on scientific issues during the course of CIPM meetings.

The CIPM approved the proposed text with the agreed changes for the five Draft Resolutions to be submitted to the General Conference on Weights and Measures (CGPM) at its 25th meeting (2014). The CIPM charged the Director of the BIPM, A. Henson and R. Wielgosz to come forward with a Draft Resolution on the impact of metrology.

The CIPM accepted the provisional timetable for the CGPM meeting and decided that the preparatory meeting on the dotation of the BIPM will take place on the morning of Monday 17 November 2014 (lab tours and presentations to follow in the afternoon).

The CIPM charged the CIPM President and Secretary to prepare a communication on formation of the Working Group on the Dotation of the BIPM to be sent to Member States.

The CIPM charged the BIPM to hold a meeting of NMI Directors in 2015 dedicated to the CIPM MRA review focusing on the benefits of the CIPM MRA, as well as establishing views on what works well, and what needs to be changed. Representatives from other key stakeholder groups will be invited to present their views. In the meantime, the CCs and the JCRB will be encouraged to continue their ongoing efforts to streamline operations within the existing framework, and prepare for the wider review in 2015.

The CIPM supported the proposed BIPM Work Programme for the years 2016 2019 as a basis for the final document and charged the Director of the BIPM and A. Henson to take the CIPM members comments into account.

The CIPM decided that the Work Programme would be opened online to Member States for comments and the consultation be brought to the attention of the Directors of National Metrology Institutes and Designated Institutes.

The CIPM decided that the alternative Time activity "T-A3.3 Frequency comb validation" in the proposed BIPM Work Programme would remain an optional project. The CIPM requested the Director of the BIPM to review the costs and scope of the project. Optical frequency combs for the realization of the length unit are, and will become, even more important and decisive tools. The absence of a formal validation programme for those measurement systems at the heart of the realization of the SI base unit must be seen as unsatisfactory and deserves closer consideration of the CIPM and BIPM in the BIPM Work Programme.

The CIPM requested that consideration be given to including the alternative Chemistry activity "A2.1.4 Small Molecule Organic Primary Reference Comparisons (Pure Materials)" in the Work Programme.

The CIPM charged the CIPM Secretary to send a copy of the resignation document signed by the 16 members present at Session I of the 103rd meeting of the CIPM (March 2014) to the two absent members for them to sign and send it back as soon as possible.

Following Decision CIPM/102-31, the CIPM in its meeting unanimously supported the proposed text on the planned resignation process for CIPM members required to implement the revised rules and procedure for election of CIPM members that will be submitted to the General Conference on Weights and Measures (CGPM) at its 25th meeting (2014).

The CIPM charged the CIPM Secretary to initiate by early April 2014 a second round of communication to Member States representatives and Directors of National Metrology Institutes seeking their continuing support to nominate potential candidates.

The CIPM decided that, in response to the Norwegian concerns on aspects of the Criteria and process for election of CIPM members document, a letter will be prepared to be included in the CIPM minutes and charged the President of the CIPM to convey the message to Norway.

The CIPM decided to convene a group composed of S. Arlen, W.E May, J. McLaren, and T.J. Quinn to review the wording of the Draft Resolution on the election of the CIPM.

The CIPM, noting the action from the CC Presidents meeting requesting K. Carneiro to convene a meeting of CC Executive Secretaries (from CCs involved in key comparisons conducted on a sequential basis) to draft a guidance document to address delays in this type of key comparison for presentation to the CIPM, decided that that action should be discontinued following information received from the Director of the BIPM that he is already addressing this issue.

The CIPM requested the BIPM to recirculate the JCGM "revised work programme" for WG2 sent to CIPM members in mid-December 2013 to ensure they have no further comments.

The CIPM decided, on the basis of the criteria it has previously adopted, that it would be appropriate for the Republic of the Philippines to accede to the Metre Convention. The BIPM will convey the Decision, recalling Resolution 4 'On the status of Associate State of the General Conference' adopted by the CGPM at its 24th meeting, and the implications regarding the increase in subscription should the Republic of the Philippines choose to remain as an Associate of the CGPM.

The CIPM accepted the minutes of the 102nd meeting of the CIPM as a true record.